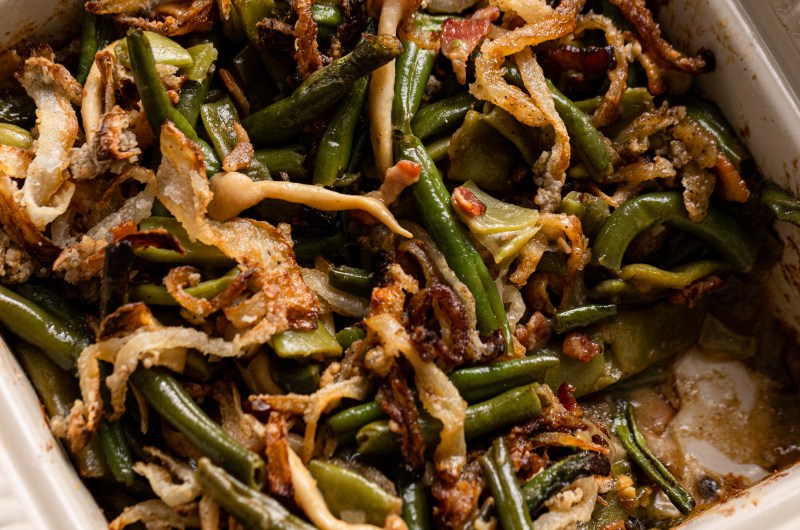 This gluten-free green bean casserole is about to become your new favorite holiday side dish!

Confession… green bean casserole was never been my favorite holiday side dish. Truthfully, it’s usually not even on our Thanksgiving or Christmas menu. Growing up, my mom would make her grandmother green bean recipe. It was essentially green beans sautéed in bacon and onions. It was very simple and had great flavor. That being said, compared to mashed potatoes or stuffing, this dish was often overlooked. When we would go to relatives houses for holidays and they had green bean casserole, I would always try it. But there was always one consistent thought: soggy. The dish always lacked texture and was usually drowned in cream of mushroom. So, all of this to say that I was not the biggest green bean fan.

I’m happy to report that has changed and I have this recipe to thank for it! As I prepared for the holidays, I kew I wanted to make a green bean casserole that had the flavor components of the green bean dish my mom used to make. I wanted the green beans to shine through but still have that rich flavor of the bacon. So, I started recipe testing and after a few attempts, this Mushroom & Bacon Green Bean Casserole was ready to go! Now I’m actually looking forward to having green beans this holiday season!

What is Green Bean Casserole?

While most Americans grew up with some kind of variation of a green bean casserole for Thanksgiving, a handful don’t really know what’s in it. Green bean casserole is a baked dish featuring green beans, cream of mushroom soup, and French fried onions. For most, those crispy onions are probably the best part! The fried onions are usually garnished on top or mixed into the casserole. They add a nice crunch to the (sometimes) green beans swimming in cream of mushroom soup.

This casserole, like all dishes, can have different additions. Many people like to add in fresh mushrooms to their casserole. Some opt to make their own cream of mushroom soup instead of using canned. And others go a step further by forgoing the cream of mushroom soup and using a roux as the wet component. Every family and restaurant has their own recipe of green bean casserole that has most likely been passed down for generations.

How Does My Recipe Differ?

Now that we’ve covered the basics, you may be wondering… how is this recipe different? Well, for starter’s it has bacon! As we know, bacon just makes everything better. But the biggest way my green bean recipe differs from others is that it has more flavor and less cream of mushroom soup. I still like using the cream of mushroom soup because it adds flavor. I’ve just found that you have to use it sparingly because a little does go a long ways. Not only is it high in sodium, but too much of it can result in mushy green beans. The goal of my recipe was to keep the vegetables fresh, keep the dish flavorful, and have a consistently crunchy texture!

Step One: The Green Beans

Here’s the thing that is often overlooked when it comes to green bean casserole… the green beans are still the star of the dish! You should want their natural flavor to shine through and they should still have a little crunch to them. Most importantly, they should still be green. If the green beans are looking grey, that’s your biggest sign that you’ve used too much cream of mushroom soup.

So, how do we keep the integrity of the green beans? First, fresh green beans over frozen green beans always. Green beans don’t have a strong flavor to begin with but they do have great texture. The frozen green beans just can’t replicate that compared to fresh green beans. Start by snapping the ends off of twenty-four ounces of green beans and washing them. Before we can sautéed them, we first must boil them. Instead of using water, use chicken broth to impart more flavor. This is a great trick that you can use for anything from quinoa to rice!

Once the green beans are boiled, drain the liquid and set them to the side. The next few steps will focus on the bacon and vegetables. I like two use the same pan for these next steps because it builds so much rich flavor into the dish.

While the green beans are cooling to the side, it’s time to cook the bacon and vegetables. Start with a large pot or Dutch oven. Cut three strips of bacon into bite-sized pieces and add them to the pot. Cook the bacon over medium heat for about five minutes. Once the bacon begins to shrink and turn a darker shade of pink/ brown, use a spatula to remove the bacon bits. Place them on a plate lined with a paper towel to absorb any excess fat and grease. The bacon should not be fully cooked, just slightly crunchy.

Next, add two tablespoons of butter to the pot. There will be some grease in the pot from the bacon- that’s okay, we want that flavor! Once the butter has melted, reduce the heat to medium-low and add one minced shallot. Cook the shallot down for two minutes, stirring consistently to prevent it from burning. Add two minced cloves of garlic and a bite of a dry white wine to the pot. The wine will help deglaze the pot and allow you to scrape off any burnt bits. Don’t remove them though; they have so much flavor that really adds to the dish.

Once the pot is deglazed the garlic has cooked down slightly, it’s time to throw in the mushrooms. You can really use any variation of mushrooms you’d like! For this recipe, I opted for the enoki mushrooms. They’re not as common as button or cremini mushrooms but I love them for this dish. They have a mild flavor and are a little more crunchy; which, pairs well with the consistency we’re going for. After the mushrooms have cooked in the pot for a minute or two, add in the cooked green beans. Then, season lightly with thyme, pepper, and salt. Remember that the cream of mushroom soup is very salty, so you do not need much salt to season the vegetables.

Allow the green beans and mushrooms to cook for about five minutes before removing from heat. Add the bacon back into the pot and give it a stir. Now, it’s time for the cream of mushroom soup. Only add 10 ounces of the soup to the green beans. Stir to evenly distribute the liquid amongst the veggies and bacon. Then, add a fourth cup of grated parmesan cheese. The parmesan cheese will temper the saltiness of the soup and pairs nicely with the green beans. Once all of that is combined and mixed in, pour the casserole into a 9″ by 9″ baking dish. Cover and bake for 35-40 minutes at 375 degrees.

This gluten-free green bean casserole is about to become your new favorite holiday side dish! 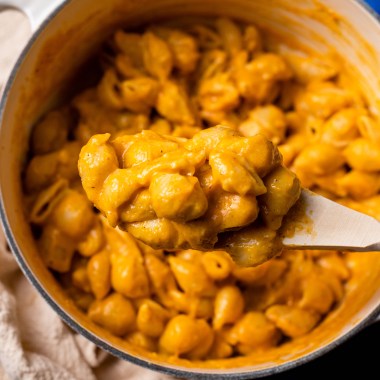