If you’re looking for a delicious and unique stuffing to serve up this Thanksgiving, try out this gluten-free recipe! The fluffy challah bread and crisp apples yields the BEST stuffing.

Like many Thanksgiving side dishes, stuffing isn’t inherently gluten-free. Whether it’s store-bought stuffing with hard croutons, or homemade stuffing with sourdough bread, it’s hard to find a good gluten-free stuffing. Often times, I end up making a kid-size version of stuffing just for me to enjoy. But that’s about to change!

Everyone is going to want some of this gluten-free stuffing! This recipe uses homemade gluten-free challah bread as the bread base. Combined with sweet apples and onions, and the flavors are out of this world.

This recipe is two parts. What I mean by that is that in order to make the stuffing, you need to make the challah bread first.

Luckily, I have a gluten-free challah bread recipe just for you! Not only does it yield two loaves- enjoy one loaf and use the other for the stuffing- but there’s no rise time so it’s easy to make! Check out the full recipe HERE.

One tip with this challah bread stuffing, usually stuffing’s utilize stale bread. Fresh bread that is fluffy makes for great stuffing as well, but stale bread is able to absorb more flavor. So, if you use this challah bread recipe, just don’t make the stuffing the very next day. Let the bread sit for a day or two. This will yield perfect stuffing!

Now, It’s Time for the Stuffing!

Are you ready to make the stuffing?

Start by cutting one loaf of challah bread into cubes. The cubes don’t have to be perfect! Then, add half a cup of unsalted butter to a large saucepan. Turn the heat to medium, then once the butter has melted add one diced white onion. Sweat the onion for about five minutes over medium heat until translucent. Next, add two cups of diced celery and two cups of peeled, diced apples.

For the apples, I like to use Granny Smith apples. Not only are they the perfect baking apple, but their sweetness compliments the onions and celery perfectly here! Just make sure to peel the apples skin completely before adding them to the saucepan.

After cooking the vegetables and apples down for 7-10 minutes on medium-low heat, add four sprigs of thyme, three sprigs of rosemary, salt, and pepper. Continue to cook this down for another five minutes.

Preheat the oven to 375 degrees Fahrenheit and grease a casserole dish or Dutch oven. In a large bowl, add the cubed challah bread and the veggie/ apple mixture. Pour one and a half cups of vegetable broth over the mixture, then use a spatula to pour into the prepared baking dish.

Bake the challah bread stuffing at 375 for 30 minutes, covered. Then, remove the cover and broil on high for 5 minutes until golden brown. Allow the stuffing to cool for 15 minutes before serving. Then, enjoy!

This gluten-free stuffing is just what you need this Thanksgiving! 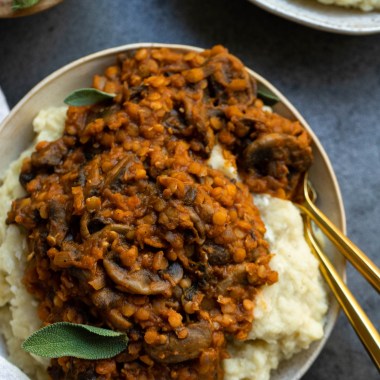