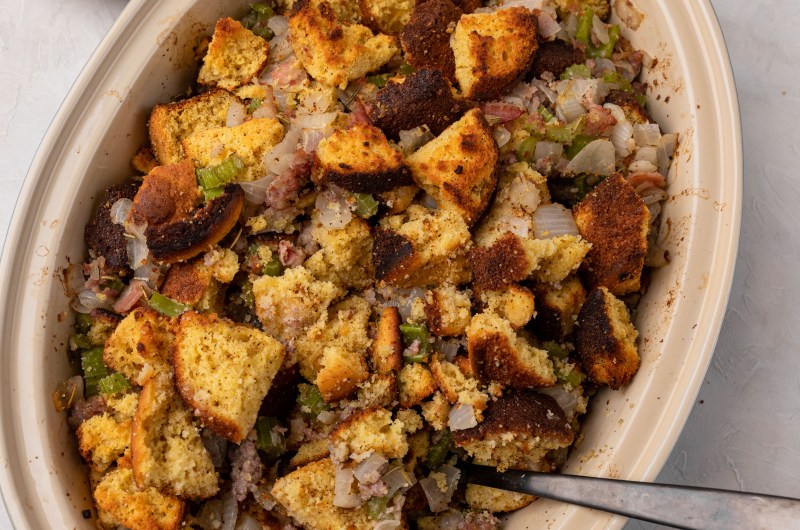 This savory, gluten-free stuffing is a must-make recipe this holiday season! With homemade cornbread and flavorful bacon, everyone will be wanting a second serving of this stuffing.

A Side Dish That’ll Steal the Show

Move over turkey! This Gluten-Free Cornbread Stuffing is sure to be the star dish this Thanksgiving. Box stuffing doesn’t hold a candle to this recipe. Not only is it savory and full of rich flavors, but it’s also easy to make from leftover cornbread! Yes, you read that right. In fact, this recipe is better if the cornbread is a little stale.

This stuffing features chicken sausage, bacon, and lots of sage leaves! Of course, it also has the classic stuffing ingredients like onion and celery. Together, this stuffing is the ultimate blend between traditional and unique! The aroma alone will have everyone beginning for seconds.

Gluten-Free Cornbread for the Base

You can’t go wrong with either of these gluten-free cornbread recipes. It just depends what kind of base you want for the stuffing. And remember, it’s best if you make the cornbread a few days before the stuffing. While the cornbread won’t be as fresh, that’s what we’re looking for. The cornbread will hold better and absorb more flavor, without falling apart.

Once you’ve decided which cornbread recipe to use, it’s time to move onto the other ingredients. Start by dicing half a cup of bacon, then add it to a large skillet. Cook the bacon over medium heat, stirring consistently to prevent the pieces from burning. Only cook the bacon for about five minutes, then remove the bacon and set it to the side on a paper towel lined plate. Use the bacon grease as an oil to cook the other ingredients and really get that rich flavor.

Dice one white onion and two cups of celery, then add to the skillet. Cook the vegetables over medium-low heat for about five minutes. Once the onion is transparent, add one pound of chicken sausage. We’re using chicken sausage instead of pork sausage here because we already have the bacon. The chicken sausage is a little less heavy and won’t weigh down the dish.

Season the sausage with two teaspoons of dried rosemary, one teaspoon pepper and half a teaspoon of salt. Use a spatula to break up the ground sausage into crumbles. Continue cooking until the sausage has lightly browned, about seven minutes on medium-low heat. Then, remove from heat and add the bacon back to the pan. Stir to combine, and then let the mixture reach room temperature.

Combining all the Ingredients

It’s time to use the cornbread! Take your 2-3 day old cornbread, and place it on a cutting board. Use a bread knife to slice the cornbread into small bite-size pieces. The cornbread will naturally crumble as we mix it with the other ingredients, so don’t make the pieces too small. Then, add the cornbread pieces to a large bowl.

Once the sausage mixture has cooled, use a spatula to transfer it to the bowl with the cornbread. Add one and a half cups of room temperature chicken broth and four chopped sage leaves. Use the spatula to fold the ingredients in. While, some pieces of cornbread will be more wet than others, all of the pieces should be damp from the chicken broth. If need be, you can add another half cup of the chicken broth.

After all of the ingredients have been combined in the bowl, it’s finally time to bake this stuffing! This stuffing is a “dry stuffing”, meaning that it’s not meant to be cooked inside of the cavity of the turkey. Instead, grease a 9″ by 13″ baking dish with olive oil. Next, pour the cornbread stuffing into the prepared baking dish. Cover the dish with foil to prevent the cornbread from burning. Then, bake for 35 minutes at 350 degrees Fahrenheit.

If you like your stuffing to have a little crunch on the exterior, remove the foil after 35 minutes and broil on high for two minutes. This is just enough time to crisp up the top of the cornbread stuffing, without overcooking or burning it. Just be careful not to go over the two minute mark because the cornbread will burn fast on broil.

Allow the stuffing to cool for 10 minutes once it’s out of the oven. Finally it’s time to eat!

Pair this recipe with a little holiday gravy for the perfect bite! 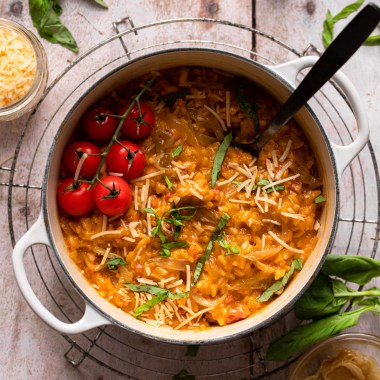