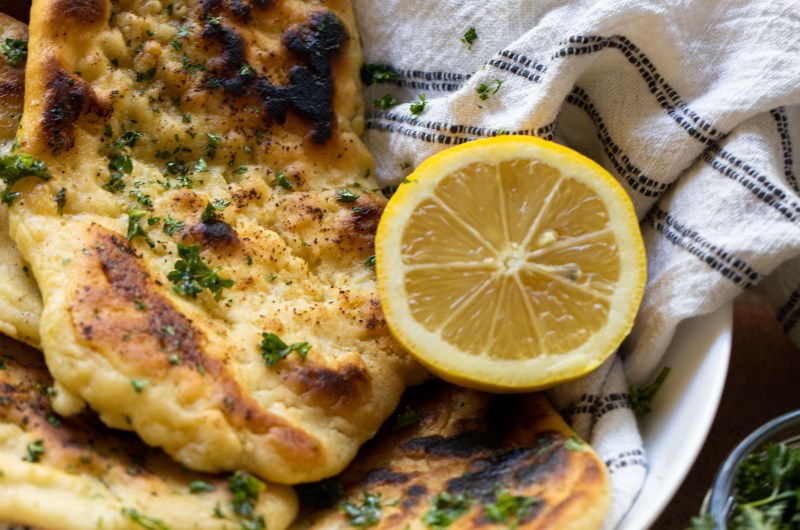 Few things are better than dipping a warm piece of this Gluten-Free Garlic Naan bread into a rich sauce. The texture is unbeatable and the flavor is out of this world.

What is naan bread? Naan is a leavened, oven-baked flatbread common in South Asian cuisines. It actually originated from Iran and Central Asia, but is now most popular and known for its tie to Indian cuisine. Naan is commonly served as a side dish with a meal and torn to be used for scooping and eating food by hand.

This recipe uses a combination of three flours and xanthin gum to give us a similar texture to traditional naan. The final result is an unbeatable texture with even better flavor- thanks to the garlic, lemon juice, olive oil, and parsley. Trust me, you don’t want to miss this recipe!

Time to Make This Gluten-Free Naan

Like any bread, making naan can be frustrating but just remember to go slowly, follow the directions and have patience.

First, start by combining the flours. We’ll be using a mixture of gluten-free flours here; which, will yield the best result. Combine one cup of tapioca flour, half a cup of Bob’s Red Mill Gluten-Free 1-to-1 Baking Flour, and half a cup of potato starch. Together, these flours form a strong bind that will yield delicious naan that doesn’t fall apart. Next, mix in one and a half teaspoons of baking powder, one teaspoon of cane sugar, one teaspoon of sea salt, and one teaspoon of xanthin gum, to the flour mixture. The xanthin gum will also help bind the dry and wet ingredients, and acts as a replacement to gluten. Then, set the dry ingredients to the side and use another bowl for the wet ingredients.

Whisk together two room temperature eggs with two tablespoons of warm water, two tablespoons of olive oil, and two tablespoons of plain Greek yogurt. Once combined, slowly add the dry ingredients to the wet ingredients. Whisk together until combined. Now, it’s time to get your hands dirty and knead the dough! Slowly work the dough until it’s slightly stretchy, then make eight to ten ovals that are a quarter of an inch thick. Set the dough to the side, and add three tablespoons of olive oil, one tablespoon of lemon juice, and 2 teaspoons of garlic powder to a small bowl. Whisk to combine, then brush each oval with this garlic mixture. Finally, throw on a heated cast-iron skillet. Watch the dough closely and flip after about one to three minutes minute. Once cooked, place in a bowl and drape a tea towel over the naan. Repeat with each piece of dough.

The Step That Ties It All Together

Once all the pieces are cooked, it’s time for the final step. This step will take the garlic naan to the next level and truly tie the whole recipe together. While the naan bread is cooling, finely mince half a cup of parsley. The fresh parsley will add a more savory component to the naan while also bringing out the earthy flavors. Once the parsley is minced, add it to a small bowl with a quarter cup of melted butter, two grated garlic cloves, and a pinch of sea salt. Grating garlic is an easy way to have super fine pieces that are almost pressed into a paste. This will bring out the aromatics without having an overpowering flavor of garlic. Whisk together then pour over the gluten-free naan bread. Toss the bowl to evenly coat all the pieces in this mixture. You can also use a silicone brush to better spread the topping more evenly across the bread.

The Perfect Side Dish

While I’ll be the first to admit that I can enjoy this garlic naan as is, it’s also a great side dish to Butter Chicken or curry. My Butter Chicken recipe comes together in less than an hour and has deep, rich flavors. Use the garlic naan to soak up the sauce, or use it as a vessel for the chicken. No matter how you enjoy it, this garlic naan recipe goes hand in hand with butter chicken.

This gluten-free garlic naan is easier to make than you’d think! 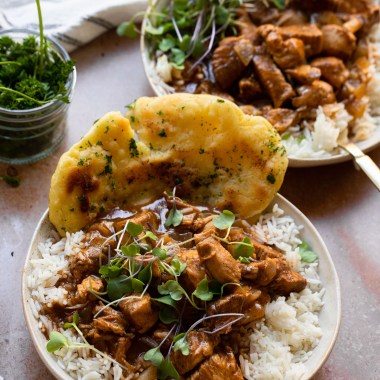 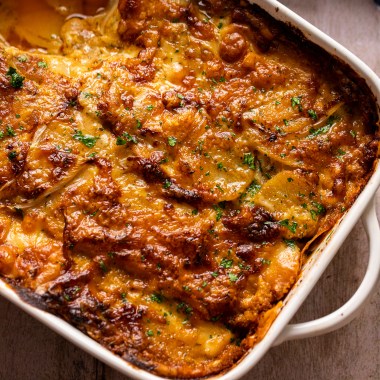