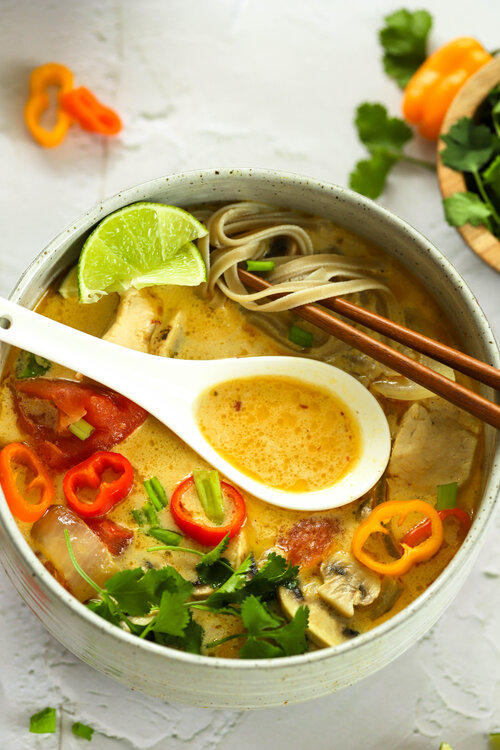 Today, we’re making what I like to call an “untraditional” Tom Kha Gai recipe. This gluten-free and dairy-free recipe utilizes the addition of rice noodles, and interchanges traditional ingredients for easy-to-find grocery store dupes. It maintains the signature flavor of Tom Kha Soup in a much easier and cost-effective way! 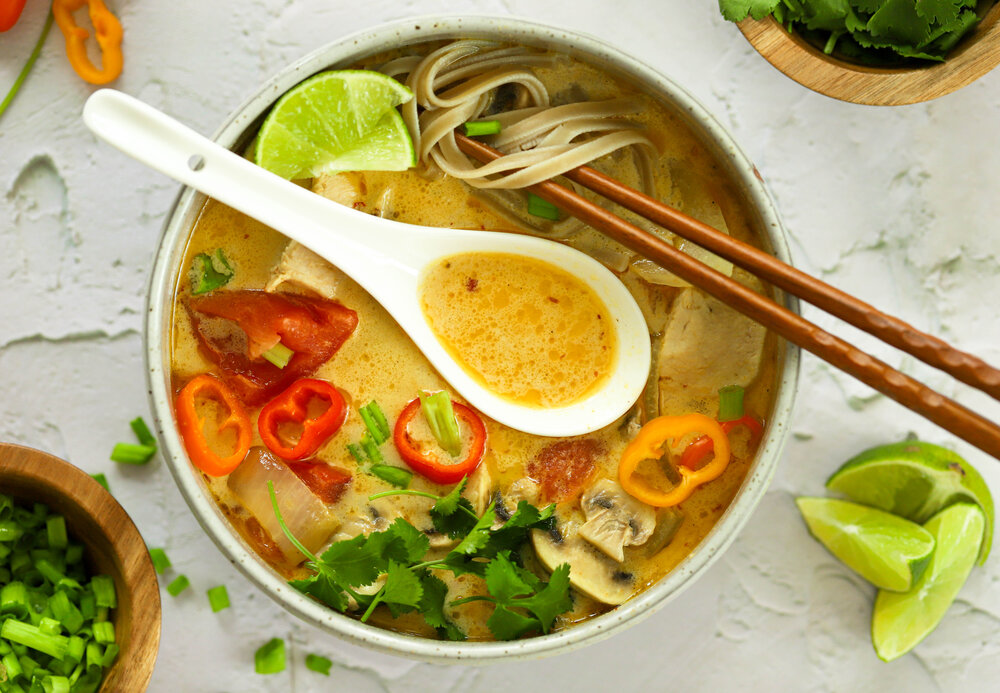 Why I love This Soup

When I was studying abroad in San Sebastian, Spain in 2016, I was traveling almost every weekend. Since San Sebastian was such a small town, I would bus an hour to Bilbao, Spain and then connect in Frankfurt, Germany before reaching my final destination. As a college student on a budget, I typically took the early morning flight or late night flight, and would have at least an hour layover in Frankfurt. In Frankfurt, I found my go-to restaurant. It was a little airport cafe that served soups, sandwiches and salads. Early on in my study abroad experience, I tried the Tom Kha soup that this cafe had. Never having tried it before, the cafe owner related it to a “spicy chicken noodle soup”. Missing home and constantly battling one cold or another, I gave it a try. To my surprise, it was nothing like chicken noodle soup- it was better. The deep flavors of the lemon grass and coconut milk gave it a richness that was both comforting and delicious. The subtle heat was also great for getting rid of any lurking colds, so the soup soon became an essential part of my travel routine.

Each layover in Frankfurt was spent at this cafe. It didn’t matter if it was 9AM or midnight, the Tom Kha soup always hit the spot and was the perfect pick me up. The broth was so soothing and gave me something to look forward to when traveling alone in a foreign country. Call it silly but one of my favorite memories from studying abroad is this soup. Thanks to that little cafe, Tom Kha soup (and Frankfurt) will always hold a special place in my heart.

So, What is Tom Kha Soup?

Tom Kha soup, also known as Tom Kha Gai soup or Thai Coconut soup, is a spicy and sour soup. The word “Kha” translates to “galangal”, which is a type of root vegetable. This aromatic veggie is often confused with ginger, as they resemble one another but are actually quite different when it comes to taste. Ginger is sharp and spicy, while galangal is more citrusy. Galangal is often used in Southeast Asian cuisines such as Thai, Indonesian and Malaysian recipes.

Tom Kha soup is often confused for Tom Yum soup. You’ve probably seen both options at Thai restaurants, but they’re actually very different. Tom Yum soup is a combination of Thai and Chinese cuisine; it also uses shrimp instead of chicken. Tom Yum soup is typically spicier than Tom Kha, and is more of a traditional “hot and sour” soup that most people recognize from Chinese cuisine.

I’m going to make it easy and save you a trip to the Asian Market. While traditional Tom Kha soup utilizes galangal and kaffir lime leaves, we’re going to change it up a bit. Instead of galangal, we’re going to use ginger to give the soup a deeper flavor and add a touch of heat. As well, you can forgo the lime leaves. In my opinion, they’re too bitter and fresh lime juice works better to add a touch of acidity and citrus notes. Tom Kha soup also calls for chili oil, which we are going to swap for chili garlic sauce. This sauce can easily be found at your local grocery store, like Trader Joe’s. Plus, the oil portion of the chili oil causes a film layer to form over the soup when it’s refrigerated because the oil separates from the broth. Once this happens, it’s hard to regain that flavor. By using chili garlic sauce, you’re able to add the heat, control the oil, and avoid the oil from separating once refrigerated.

If spice just isn’t your thing, tone down your heat by adding a touch of brown sugar, palm sugar or coconut sugar. Add a tablespoon MAX, because too much will throw off the flavors of the soup and cause it to be overly sweet. You can also add more coconut milk or chicken stock to mellow out the spice.

Other subtle dupes include switching out Thai red curry paste for green curry paste, white mushrooms for oyster mushrooms, and coconut aminos for soy sauce. I also like to add half a white onion, some Roma tomatoes, and rice noodles to my soup. I find that sometimes Tom Kha Soup at restaurants can be more broth based and I like to thicken it up a bit. These changes don’t alter the flavor of the soup, and if anything enhance it!

One thing that’s non-negotiable here is the lemongrass stalks. These are 100% necessary to create the broth and give the Tom Kha soup it’s signature flavor. While Trader Joe’s typically doesn’t carry lemongrass, you can find it at your local Sprouts, Vons, or Whole Foods. You only need 1 stalk, as a little goes a long ways and we’re going to cut it into two. Before adding the lemongrass to the pot, press your knife on the stalk to release the aromatics. Act like your pressing on garlic to remove the peel, and you’ll know once you’ve pressed hard enough when you hear a slight crunch.

I like to enjoy my Tom Kha soup with both chopsticks and a ramen spoon! Before digging in, I top my soup with sliced green onions and cilantro. You can also use Thai Basil instead of cilantro! But let me share a tip with you, make sure you squeeze a bite of lime juice on top before enjoying. This really brings all the flavors together!

Store the Tom Kha Soup in an air tight container in the refrigerator for up to 4 days. You can freeze this soup, but I would recommend removing the rice noodles first. Unfortunately, noodles don’t reheat well after being frozen and usually turn to mush.

To thaw your frozen soup, soak the container in warm water for 1 hour or microwave (covered) for five minutes. This is to loosen the edges, so you can dump the soup into a pot. From there, heat the soup over medium until it begins to simmer. Then serve! 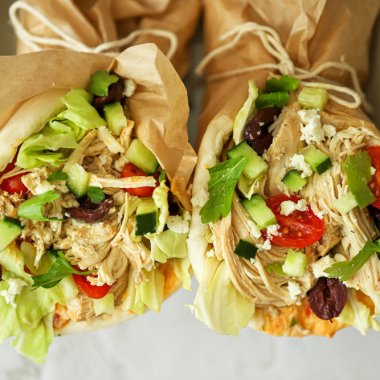 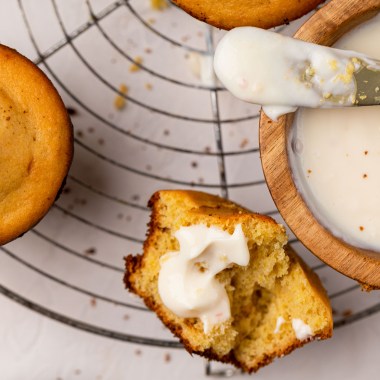