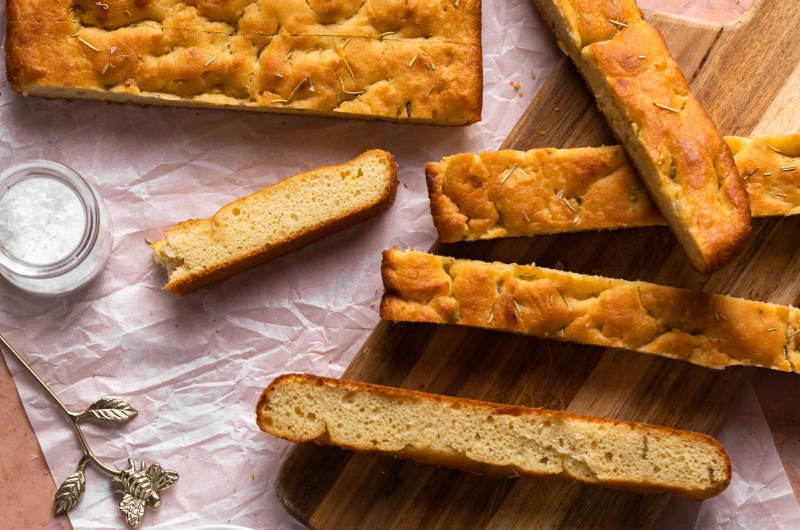 Who knew making focaccia bread without gluten would be so easy! This delicious bread yields the perfect texture and tastes so similar to restaurant-style focaccia that you wouldn’t even know the difference.

Bread-making is no easy task. Take away gluten and the level of difficulty increases tenfold. It takes a lot of trial and error to perfect a gluten-free bread recipe. But it’s all worth it when you hear those words, “I wouldn’t even be able to tell it’s gluten-free.”

In the gluten-free world, we’re constantly striving to have our products “not taste gluten-free”. What exactly does this mean? For those of you who aren’t gluten-free, you’ve probably never had bad gluten-free food that tastes like cardboard or falls apart. It’s hard to bake sweet treats or bread without gluten to hold everything together. We strive for our recipes to taste and have the same texture as normal products because we know how breads and baked goods should hold up.

Since going gluten-free four years ago, I’ve always been scared to tackle bread-making. It took my awhile to even jump into gluten-free baking. But after a lot of research (and YouTube tutorials), I tried my hand at one of the easier breads to make: focaccia. No sourdough starter necessary! And let me tell you, I couldn’t be happier with how the final result turned out. The texture is so similar to restaurant-style focaccia bread that you really wouldn’t be able to tell the difference if the two were side by side.

I’m so excited to share this Gluten-Free Focaccia Bread recipe! Here’s hoping you find the same excitement and comfort in this gluten-free loaf that I do.

Time to Rise to the Occasion

You can tell if a bread recipe works before you even bake it by how much it rises. Here’s a tip that I wish I knew my first time around: if the dough doesn’t rise, the yeast didn’t work. But we’ll get into that and how to prevent it so you don’t make the same mistake.

Start by adding three and a half cups of Bob’s Red Mill Gluten-Free All-Purpose Baking Flour to a large, oven-safe bowl. The flour you use is crucial to the texture of the recipe. While many gluten-free bread and baking recipes call for a mixture of flours (tapioca, potato starch, coconut, almond, etc.), that is NOT the case for this recipe. Mixing a variety of flours will not yield the desired result, and this all-purpose baking flour from Bob’s Red Mill is the best I’ve found.

Next, add one tablespoon of gluten-free baking powder, two and one fourth teaspoons of instant yeast, three fourths teaspoon of salt, and one half teaspoon of xanthin gum. A little bit of xanthin gum will go a long ways here and help bind the ingredients together. Stir the dry ingredients together, then set to the side. Then, in a small bowl combine two cups of warm water with one tablespoon of cane sugar. Make sure that the water is not too warm, as that will kill the instant yeast and cause your dough not to rise. The water should be around 115 degrees. Stir the water until the sugar has dissolved, then pour over the dry ingredients.

Use an electric mixer on the lowest setting for about one minute to combine the dry ingredients and the water. Then, add half a cup of olive oil and one and a half teaspoons of apple cider vinegar to the bowl. Beat with the mixer on low for two minutes to thoroughly combine. Next, preheat the oven to 200 degrees Fahrenheit, but turn off the oven once it reaches 115 degrees. Place a tea towel over the bowl and put the bowl in the oven to rise for 30 minutes.

Once the dough has risen in the warm oven for 30 minutes, carefully remove the bowl. The dough should be almost doubled in size and look very airy. When you touch the dough it should be slightly sticky. If the dough has not risen or looks hard, then your water or oven were too hot and the yeast was killed. But, hopefully that’s not the case!

Preheat the oven to 400 degrees Fahrenheit. Grease a nine by thirteen inch baking dish and line it with parchment paper for easy removal. Trust me, even if the baking dish is greased and floured, this brad will still want to stick to it. Use a spatula to transfer the dough to the prepared baking dish and spread the dough evenly across it. Then, add about one tablespoon of olive oil over the dough and put a little oil on your fingertips. To create that signature focaccia dimple look, you’re going to use your oiled fingertips to press into the dough, then release. Repeat the process across the top of the dough until it looks dimpled.

Next, combine one tablespoon of olive oil in a small glass with two teaspoons of dried rosemary, one teaspoon of oregano, one teaspoon of sea salt, and a squeeze of fresh lemon juice. Mix together to combine then pour it over the dimpled dough.

Time to Bake the Bread

It’s finally time to bake this gluten-free focaccia bread! Place the baking sheet in the middle of the oven and bake for 23 minutes at 400 degrees Fahrenheit. After 23 minutes, broil on high for two minutes. Broiling it will crisp up the top of the brad and give it a golden appearance. Just make sure you don’t go past two minutes as the top will start to burn.

Allow the focaccia loaf to cool for ten minutes in the baking dish. After the allotted time, take hold of the sides of the parchment paper and gently pull up. The paper should release from the dish and take the bread with it. Place the parchment paper on a cutting board, then carefully remove it from the bottom of the focaccia. Allow the bread to cool for another five minutes before slicing it. During this time, garnish the whole loaf with flakey sea salt for a finishing touch!

The Bread Doubles as a…

While this gluten-free focaccia bread is AMAZING on it’s own, it can also be used as a pizza crust! If you’ve never tried focaccia bread as a pizza crust, then I highly suggest you check out this recipe now. This Focaccia Crust Pizza is unlike any gluten-free pizza you’ve ever had before and is truly out of this world. Not to mention, you can custom your pizza however you see fit,

This gluten-free focaccia bread recipe is so easy to make and tastes amazing! 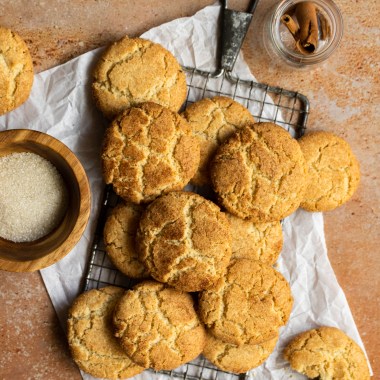 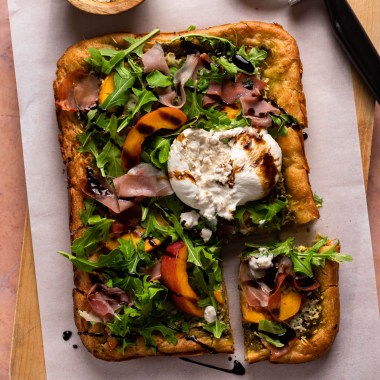