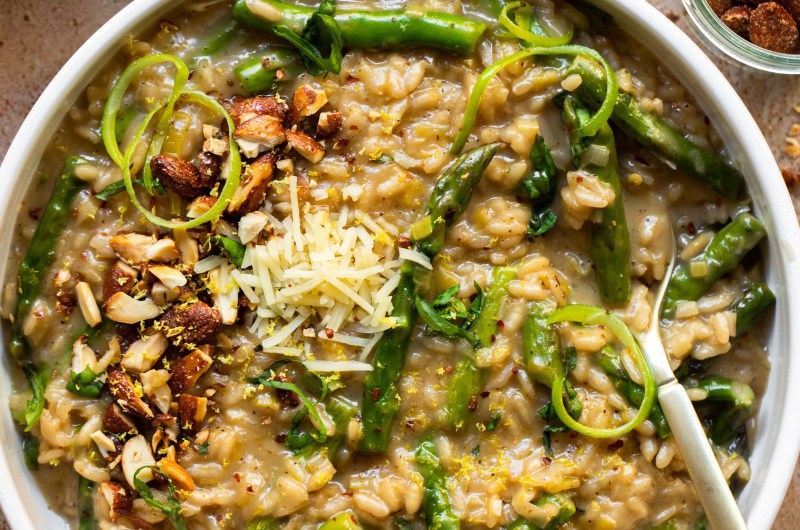 Is there anything better than creamy risotto with lemony asparagus, fresh leeks, and slivered garlic almonds? The answer to that would be no, there’s really not anything better.

The Best Risotto Recipe, Ever.

There are few things that I love more than a good risotto. Risotto can be rich, creamy, and oh so decadent. But it’s also a very versatile dish. Because the rice has no flavor, the flavor really comes from the ingredients used for the base and any toppings added. I’ve made (and eaten) quite a few risotto recipes in my day and I can say with absolute certainty that this is the best EVER.

There’s a few reasons why this risotto is so delicious and beats all of the other recipes out there.

I could go on, and on about reasons why I love this recipe, but those are definitely the top three. The addition of all three of these unique changes is what makes this recipe like no risotto you’ve ever had before. Plus, it’s so much easier to make than you would ever think!

The Base: Champagne, Leeks, & Butter- oh my!

As previously stated, every good risotto recipe starts with a killer base. The base is what all other flavors will build off of. Ultimately, the base will make or break a risotto dish.

Start by adding 1/4 cup of unsalted butter to a large pot or Dutch oven. Melt the butter over medium heat, then add one large leek that’s been diced, one minced shallot, and four cloves of minced garlic. While many would opt to use the leek on its own and not pair it with the shallot, the combination of the two creates a deeper flavor. Sauté for about five minutes until the shallot is translucent.

Now, add one cup of arborio rice. You want to toast the rice before adding the champagne. Toasting the rice in the base creates a rich flavor. Season with one a half teaspoons of pepper and one teaspoon salt. After two minutes, add one fourth cup of champagne of your choice. Stir consistently until the champagne is absorbed, then reduce the heat to medium-low.

Vegetable Broth, and Then Some More

You’ve probably heard that one of the secrets to good risotto is using warm broth. This is 100% true! The vegetable broth here needs to be warm so it’s better absorbed by the rice.

Heat half a cup of vegetable broth in the microwave at a time before adding it to the risotto. Stir as you pour in the broth, and continue to stir until absorbed. Then, repeat this process until three and a half cups of vegetable broth have been added. You must stir consistently so that the rice does not burn. Trust me, you’ll feel this in your arms once you’re done!

Time to Finish This Dish

Now for the asparagus! Remove the stems and cut the asparagus into thirds. Add to a pan with one tablespoon of olive oil and sauté over medium heat. Season with two teaspoons of lemon juice, one teaspoon of pepper, and a half a teaspoon of salt. Once slightly soft but still firm- about seven minutes- add to the risotto. Stir to combine the asparagus, then serve up.

Finish the risotto with one fourth cup of sliced basil leaves, 1 teaspoon of lemon zest, and half a cup of slivered and toasted garlic almonds. The BEST garlic almonds are from Sante Nuts! The flavor of these nuts is outstanding and perfect finish to our dish. Use my code “BOTTOMLESSPIT” for 15% off your order on the Sante Nuts website!

It doesn’t get any better than this fresh, creamy, and seasonal risotto recipe! 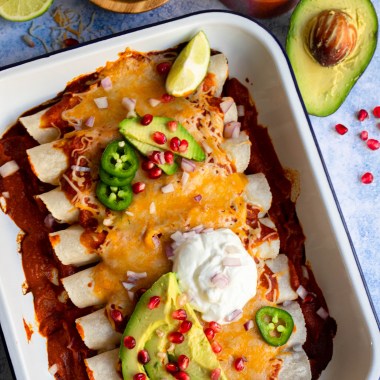 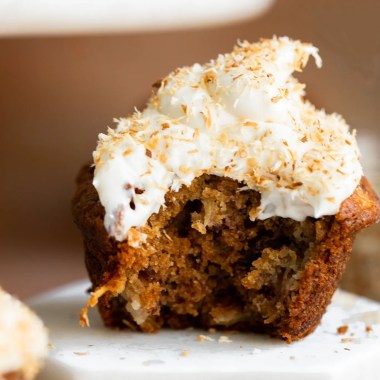