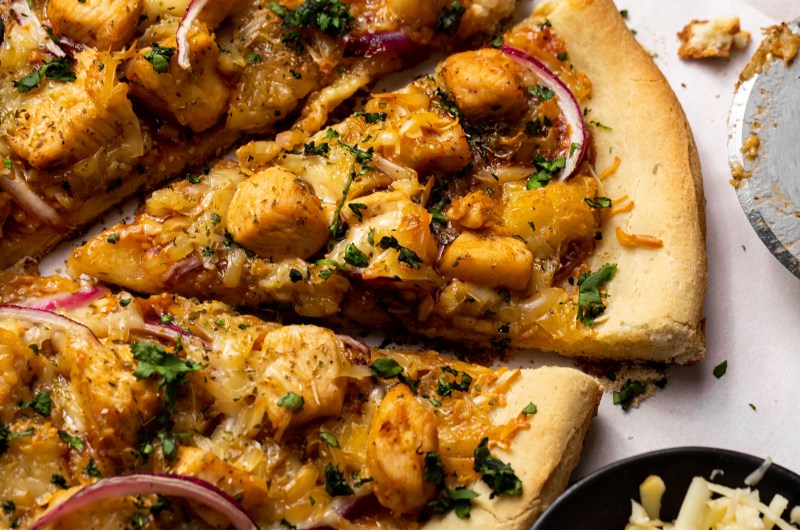 This gluten-free pizza with homemade barbecue sauce is better than any restaurant or store-bought pizza! Check out this Gluten-Free BBQ Chicken Pizza recipe now!

Why Homemade Pizza is Just Better

There’s nothing better than delicious pizza, especially homemade pizza. Somehow, homemade pizza just tastes better to me. This gluten-free BBQ Chicken pizza is one of my favorites to make. Not only is this the best gluten-free dough, but this homemade barbecue sauce is out of this world! While you can always use a store-bought BBQ sauce, trust me, you won’t want to after tasting this sauce. This tangy, homemade barbecue is one of the best parts of the pizza and so easy to make. Check out the recipe below!

All About the Sauce

Like every great recipe, a good sauce is a must. This homemade barbecue sauce is the foundation of our Gluten-Free BBQ Chicken Pizza and you can truly taste the flavors in each bite. Could you buy store-bought barbecue sauce for this recipe? Yes. Would it be easier? Yes. But, would it taste as good? Definitely not.

There are quite a few ingredients that come together to create the barbecue sauce. Each ingredient builds on the next and the end result is so worth the work. Here’s what you’ll need:

Like I said, quite the list. You may be wondering, root beer- really? Yes! Root beer is a secret trick to creating a barbecue sauce that is sweet and has gorgeous, rich flavors. The brown sugar and maple syrup also add to the sweetness of the sauce, while the tomato paste and apple cider vinegar balance it with a touch of acidity. And while we’re only using a tablespoon of horseradish here, that spice goes a long ways!

Start by cooking down the onion in the olive oil. Sweat over medium-heat in a medium-sized pot for roughly five minutes before adding the minced garlic and tomato paste. Cook for five minutes, stirring consistently to prevent burning. Then, add the rest of the ingredients to the pot! Stir to combine and reduce the heat to medium-low. Cover and let simmer for 20 minutes, stirring every five minutes or so. Finally, remove from heat and allow to cool for at least 10 minutes.

When it comes to gluten-free dough, a lot of people shy away because they think it’s much more difficult to work with. While there is a learning curve, once you find the right recipe (like this one!), you’ll be shocked by just how easy it truly is!

Start by combining three fourths cup of warm water with one tablespoon of cane sugar. It’s important to make sure the water isn’t too hot as it can kill the yeast, and then you’ll have to start over. To ensure the water is the right temperature, use a thermometer. The water should be around 115 degrees. Mix the water and sugar together, then add the active dry yeast. Allow to sit for at least five minutes, so the yeast can activate. You can tell when the yeast has activated because it will begin to form bubbles and it looks foamy.

In a large bowl, combine 2 1/2 cups of all-purpose, gluten-free flour with a teaspoon of sea salt. Then, pour in the yeast picture and use an electric mixer to combine. Next, add the egg, olive oil, and apple cider vinegar. Mix on low for one minute, before transferring the dough to a cast iron pan. Make sure the pan is oiled and dusted with flour to prevent the dough from sticking to it.

To spread out the dough and make your crust, use an oiled spatula or add olive oil to your hands to spread out the flatbread. Once the dough is spread to your liking, place in the oven at 450 degrees for five minutes, or until the crust turns golden. Then, remove from the oven and allow to cool before adding the toppings.

It wouldn’t be a bbq chicken pizza without the toppings! Check out the ingredients that you’ll need:

Once your crust has cooked for five minutes and cooled, start by spreading a heaping tablespoon or two over the crust- you can use more if you would like to. Then, add the shredded mozzarella cheese and julienned red onion. Before you add the chicken to the pizza, it needs to be lightly cooked.

Start by adding the diced chicken breast to a pan with the oil oil and two teaspoons of the barbecue sauce. Cook over medium heat, and season with salt and pepper. Stir occasionally to prevent the chicken from burning, then remove from heat after about seven minutes. Add the desired amount of chicken to the pizza, then season with oregano. Place the pizza back in oven to cook for 10-15 minutes. Allow the pizza to cool before adding the minced cilantro.

One bite of this delicious gluten-free BBQ Chicken Pizza, and you’ll be hooked! Homemade pizza can seem intimidating, especially gluten-free pizza, but it’s so much easier than you would think. The dough comes together so quickly, and with the active dry yeast, there’s no waiting around for the dough to rise. Not only does this save you time, but also so much stress! Trust me, waiting to see if your dough will rise correctly only to be disappointed an hour later is not a fun game.

This gluten-free pizza with homemade barbecue sauce is better than any restaurant or store-bought pizza! 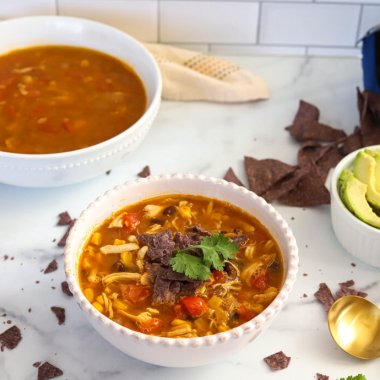 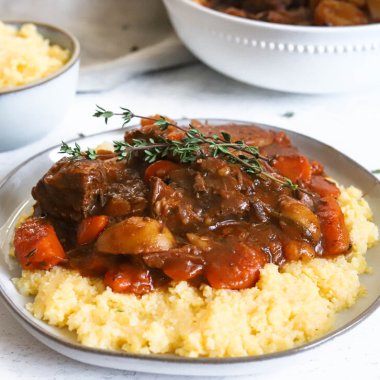