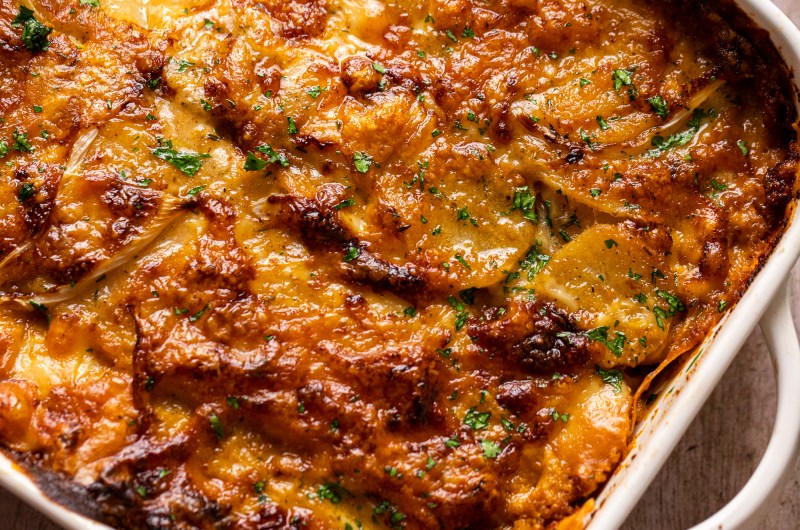 Move aside mashed potatoes! This creamy potato bake with onions and a mornay sauce is stealing the side dish show this holiday season.

An Unbeatable Side for Any Dinner

No matter the holiday, you can always find a side dish of potatoes. From mashed potatoes to scalloped potatoes, this starchy side is always on the menu. And for a good reason! Nothing pairs better with ham for Easter, prime rib for Christmas and turkey for Thanksgiving than potatoes.

This holiday season, we’re mixing things up with a new side dish. This recipe has been a work in progress for a while. At first it was scalloped potatoes, but I found my recipe incorporated aspects of both potatoes au gratin and dauphinoise potatoes. However, it didn’t really fall into any of these three classic potato dishes. Then, I realized it wasn’t any of these recipes- it was it’s own dish! Once I perfected the recipe, I decided to just leave it as simple as possible: a potato bake.

The combination of a creamy mornay sauce, onions, and a cheesy finish make for the perfect side dish. It is so decadent and will make you forget about all other potato dishes! But don’t take my word for it! Make this recipe yourself to find out what all the hype is about.

What Exactly Is a Potato Bake?

This dish is unlike any recipe you’ve had before. While I first started this dish with the intention of making scalloped potatoes, it evolved past the traditional recipe. Scalloped potatoes are often compared to potatoes au gratin or dauphinoise potatoes. There are very small differences that makes these dishes different from one another. And this bake incorporates aspects from each one! So let’s break down exactly what these dishes are and how they vary from each….

So, how does this bake differ from these potato dishes? This bake is made of uncooked potatoes, layered with onions and a mornay sauce, then finished with a combination of cheeses on top. While this bake incorporates aspects of all three dishes, it doesn’t fit into the category of any dish. It’s simply and potato and onion bake, much like a casserole but a little more advanced.

What is a Mornay Sauce

You’ve probably heard of a roux and béchamel sauce, but have you heard of a mornay sauce?

How to Make the Mornay Sauce

We’ll start by making the roux! Add one six tablespoons of unsalted butter to a large pot or Dutch oven. Melt the butter over medium heat, then reduce the heat once the butter has melted. Slowly whisk in one fourth cup of gluten-free all purpose flour, one tablespoon at a time. It’s important to go slow. If you add all the flour at once, the roux can break or become clumpy. Once all the flour is incorporated, we have our roux!

Next up, adding the milk to make the béchamel sauce. While you can use milk or heavy cream, I like to use coconut milk instead. It’s a lot less heavier than cream but a great substitution! Add one 15 oz. can of unsweetened coconut milk to the roux. Add half the can of coconut milk, and whisk. It may look like the sauce has curdled but it hasn’t. Just keep whisking until it becomes smooth. Then, add the rest of the coconut milk and whisk again to combine.

The last step is adding in the spices to the mornay sauce. Season with two teaspoons dried thyme, one and a half teaspoons of black pepper, half a teaspoon of nutmeg, three fourths teaspoon of paprika, and one teaspoon of salt. Once the seasonings are mixed in, remove the sauce from the heat.

Before we can layer the potatoes, we first need to prepare the baking dish. Take a nine by thirteen inch baking dish and grease it. Make sure you grease the edges too as the potatoes will be stacked to the very top! Then, preheat the oven to 375 degrees Fahrenheit.

Now, it’s time for the potatoes! Start by washing and peeling four russet potatoes. Then use a mandolin slicer to cut the potatoes into half an inch thick slices. This not only ensures that each potato is the same thickness, but also makes the process much quicker! Once all of the potatoes are sliced, set them to the side. Julienne half of a white onion and place by the potatoes.

To layer the potatoes, start by covering the bottom of the dish with about 3-4 rows of potatoe, laid against one another to create a domino effect. Once there’s a layer of potatoes, sprinkle the julienne white onion over the potatoes. There should be roughly five to ten pieces of onion spread out over the potatoes. Finally, whisk the mornay sauce and pour it over the potatoes and onions. Pour a little less than one fourth of the sauce over the layer, then use a spatula to disperse it. Repeat this process until you get to the very top of the dish and have done your final layer of potatoes, onions, and mornay sauce. To finish the dish, sprinkle a mixture of half a cup of grated parmesan cheese and half a cup of grated gruyere cheese over to the top.

Before you pop the potato and onion bake in the oven, slice three tablespoons of butter into five even pieces. Place four pieces of the butter on the edges of the dish and one in the center. This will prevent the edges from burning and ensure the center of the dish is perfectly crispy. Cover the bake with foil and place it in the center of the oven. We’re going to bake the potatoes for an hour and a half covered at 375 degrees. After the allotted time, remove the foil and allow the potatoes to cook for another 15 minutes uncovered. Finally, broil the potatoes on high for five minutes . Once the potatoes are golden brown, turn off the oven and remove the dish. Make sure to watch the potatoes closely as they can burn quickly on broil!

Allow the dish to cool for at least twenty minutes. Finally, before you serve the potato and onion bake, garnish with freshly minced parsley.

Potato and Onion Bake in a Mornay Sauce

Move aside mashed potatoes! This potato bake is stealing the side dish show this holiday season. 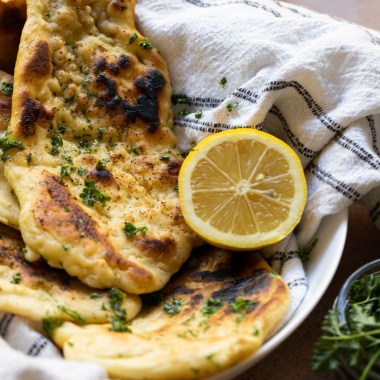 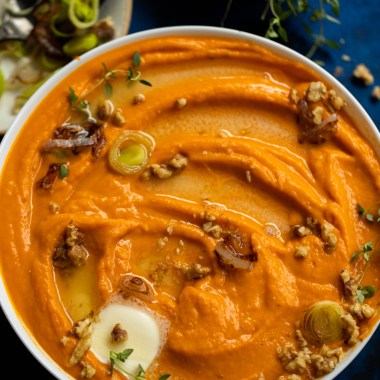